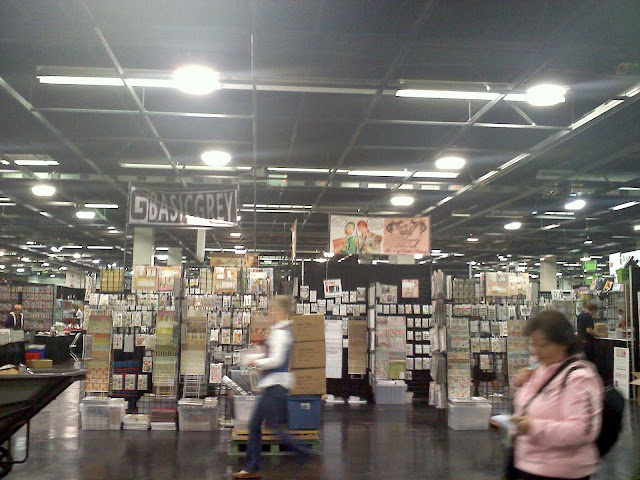 For her birthday Katie came down and she and I spent a few days in a hotel room right next to Disneyland and went to the OC Scrapbook Expo, which was just down the street. She signed us up for a few classes, I requested a Copic class as well, and on Friday we set off to enjoy the show.

The classes were fun. My Copic class was first, and it completely got her hooked on colouring. She had the same reaction that I did, completely unable to colour, and yet with a Copic in her hands it was magic. She enjoyed herself and ended up buying a very nice starter set of her very own (custom made, of course, as the "official" sets are crap). Katie's choice was a metal class, and making a mini album. I'm not into mini albums, but learning about the embossing folders, what they can do for metal and just plain old paper. Very neat.

Above is a picture of the Expo floor. I took it before it was open so you could actually SEE things. That's a huge BasicGrey booth, but there were a TON of manus and stores there alike. We shopped for bargains (never paying more than $3.99 for our Copic Sketches), and went through every single booth on the floor. We had a lot of fun shopping, spending too much money, talking with random strangers, seeing new techniques, and by the end of it my ankles were just completely DONE.

As we left, the skies opened up and rained on us, so we took a cab back, which was a short but dry trip which helped a lot because I'm not sure I could have made it back to the hotel trying to carry all the stuff we'd acquired. There was a huge debacle with the hotel room, which I'd rather not discuss, but suffice to say: Never stay at the Del Sol Inn in Anaheim (right across from Disneyland). 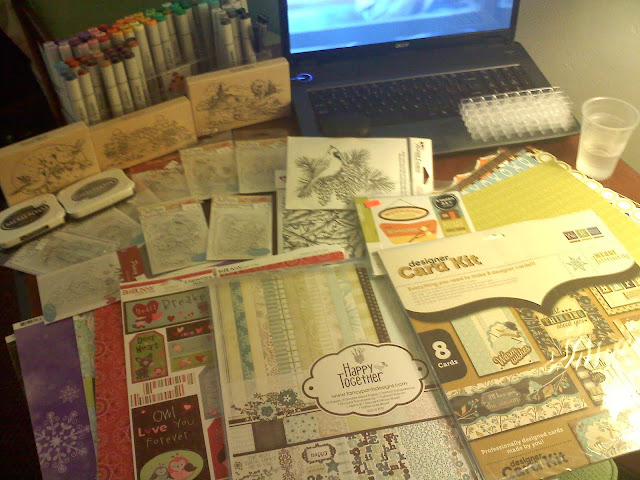 Once we settled into our new hotel and new hotel room (loyal customers of the Anaheim Plaza Hotel are we!) I took out all of my purchases and laid them out on the table in our room. 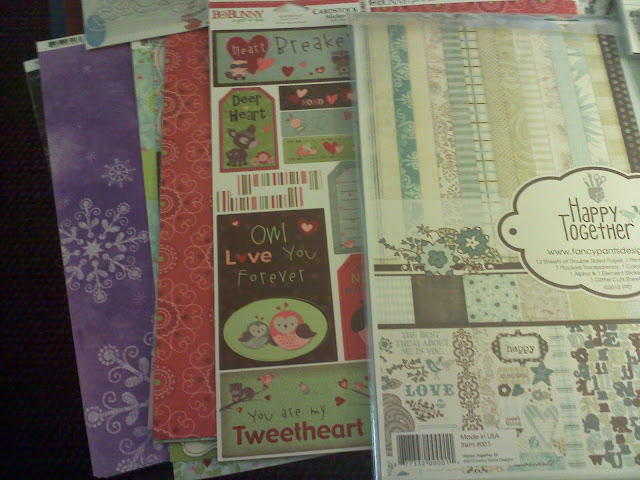 These are the papers. Two lines by Bo Bunny, the purple is for random snow photos (of which I have tons) and the pink one is for a mini album about Mike and I. I just couldn't pass up all the cute woodland creatures. The Fancy Pants is actually a new thing for me, as I'm not familiar with their lines, but it's light and pastelish which will be great for spring (I've actually just used it on two cards so far today). 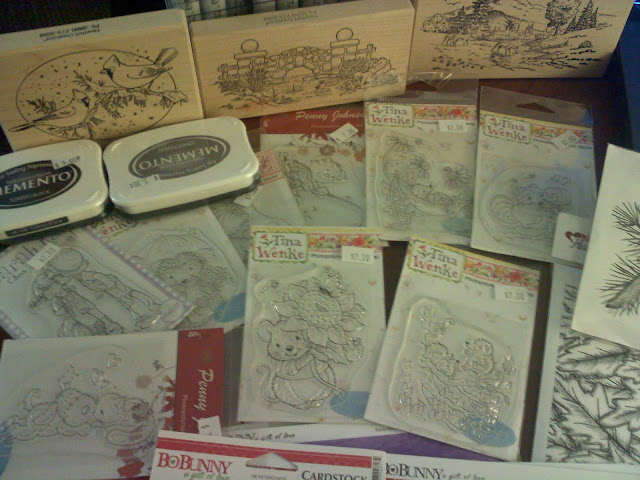 There was a booth with the cutest stamps. I can colour all of them, the examples in the booth were wonderful, and I just kinda went wild. They're a joy to colour, they're well made, and they stamp really well. The wood mounted bridge stamp was actually free when bought with the other two wood mounted and the leaves and cardinal stamps as they were buy 4 get the 5th free. Very good deal, this stamp is so adorable. Also, since the Joann's and Michael's in SoCal are so deficient, I finally got full sized Copic-compatible ink pads. Yay! 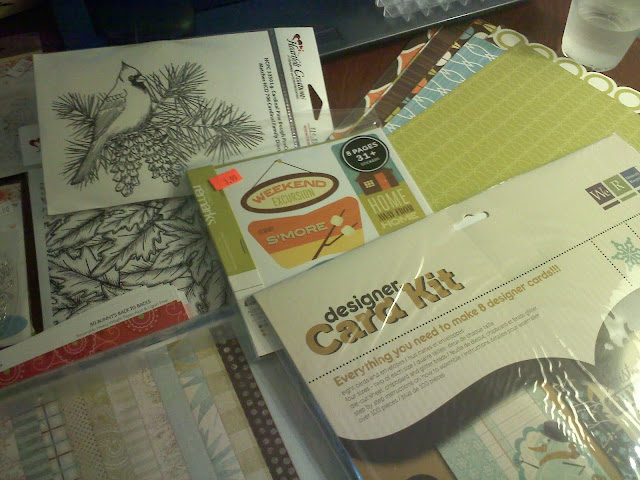 Full view of the cardinal stamp I got. I dunno what it is, but I love cardinals, which is weird cos I hate red. They had the new American Crafts woodland collection, which I found adorable, and so I bought all of those papers. It is nice to be able to make your own paper pack, and the stickers are totally cute. The We R Memory Keepers card kit is a cute winterish set. They had a deal 3 for 15, and Katie bought two of this one, and another set, so we could share the deal. I really liked the papers in the card kit, but not enough to buy the full set. I think I just wanted to play with a small amount of the papers so this kit is perfect, and at $5, why not?

So that's it, that's my haul. I spent a crapload of money, but I had a LOT of fun, and Mike said that's what he really wanted me to get out of the weekend. I've been incredibly stressed lately, Cystic Fibrosis issues, so getting away to spend time with my friend was really what I needed. I was a little worried to be away from Mike for so long, but my phone allowing me to text him all the time certainly helped a lot!