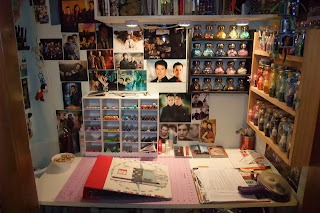 Like, three years ago at least we bought a little spice rack for my flowers, and I asked Mike to hang it up on the wall. Well.... yeah, that didn't happen, until tonight! With the addition of the Copic shelves it was obvious that my space was becoming limited and I needed to do something to clear off desk space so I could work. I finally got Mike to hang up the shelf, getting the flowers (which I don't really use anymore) off the desk so I could clear the space for actual scrapbooking. It took a bit of arranging, and I had to move my pictures yet again so no one was covered up (how rude would that be?), but this is how everything sorted out. As you can see, I'm working on a rather large project right now. Those three stacks of photos have to be whittled down into one the Washington/Oregon Vacation album. There's a pile of physical memorabilia, and a pile for the patterned paper and the Facebook posts that go into the book as well. 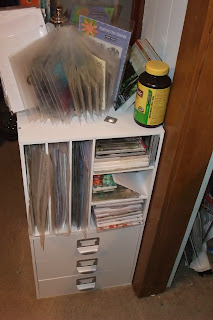 Two my left are two cubes that I bought from Michael's for 40% off. On the top is my 7 Gypsies acrylic stamp holder. I really don't like that the envelopes sag like that, just cos they're not all 7 Gypsies stamps. It bugs me. But I deal, and the spinny-ness of it means that I can see all the stamps that I have and everything gets used, which is the whole point of buying them in the first place, right? Below that is the first cube. There's paper in there, Crate Paper mostly, and some Imaginice, as well as my Cricut mats. I also have some BasicGrey chipboard sets, clear epoxy stickers, and 6x6 paper stacks. In the draws, the first one has mini albums of all different shapes and sizes. I'm not a fan of mini albums, but they have come in handy at times and I'm glad I stocked up since I was able to make Mike's mini album for our 10th anniversary without having to go down the hill. The middle drawer holds my iTop, the punches for the iTop, my Crop-a-Dile (which I don't use), and my Tim Holtz tiny attacher. The bottom drawer has various stickers, Jolee's, rub ons, and buttons. All of these coordinate with specific paper lines so they're easy to reach here. 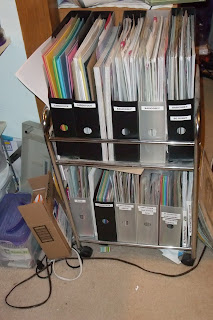 On my right is my paper cart. It's pretty well labeled, and organised. I can find what I need by just barely sifting through it because I know everything that I have and know exactly where it is on the cart. There are a few things I could get rid of, and might purge, but I can deal okay for now. On the floor in the purple thing is my Cricut carts, my new photos (which came last week) and my Tonic paper trimmer. 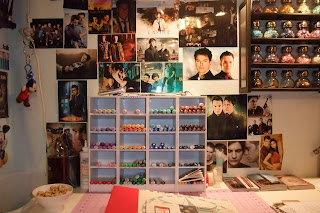 This is the desk from the seated position. Copic shelves right in front so I can see then easily. The paint can that Monica made for me holds my scissors, my writing pens, and my 6inch acrylic ruler. On the left of the shelves is my adhesive. And, of course, my sexy boys all re-organised over and around the Copic shelves instead of being blocked by them. The only thing I think looking at this picture (other than smiling at Sherlock looking crazy scary in that one picture) is "wouldn't those Copic shelves look much better if they were full?!" LMAO! 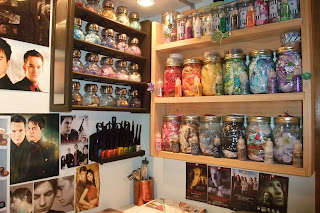 And this is the corner. It's all new! I used an old Prima shelf to house my Smooch paints (the bottles of Prima's went with my oversized flowers in one of the square cubbies seen in the photo below). They don't *quite* fit, but it's better than nothing. Mike made the ribbon shelf with his own two little hands, and I recently just put my Stickles up on there because he hasn't had a chance to make me a Stickles holder and I needed them up off my desk. And the spice rack has more Prima's on it. I do use them, just used some on the mini album project, but I'm really a minimalist scrapbooker so they don't get used quite fast enough for me sometimes. 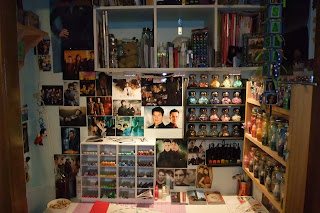 And then another overview. You can see the cubbies, the bottom of which is where my lights are mounted. I have writing pens up there, books, oversized flowers and ribbon sets (instead of just mixed ribbon in the jars), extra adhesive, mists, and glitter. Also, that little stuffed kitty was my first stuffed animal, her name is Kitty Friend and she's 28 years old. Precious. Also in this picture you can just get a glimpse of the shelf on the left wall that hold my wood mounted rubber stamps. I hate wood mounted rubber stamps because they take up so much space, but I love House Mouse stamps, so I compromise and just have a few.

So that's my closet. I hope you like it. It's small, but it works out for me, mostly. I need more desk space. I'd like to have room to put my Cricut on something solid where it won't have to move to be used. I'm also getting a Sizzix embossing machine (the blue one that looks like a purse) and I have NO idea where I'm going to put it, let alone the folders. Again, it'd be nice if it could be somewhere that I don't have to take it out to use. The whole point of my space is that I don't have to get up to use anything I have. I don't want to be running all over trying to make one page or card. I want everything at my fingertips so that I can work quickly and efficiently, and that includes not having to set up a cutter or embossing machine to be able to use it. I want everything streamlined. And, of course, I'd REALLY like to not be in our bedroom. When I'm awake late at night, or woken early coughing and sick, it'd be nice to sit down and craft. I had a room in our old house in the Bay Area and having to craft on Mike's sleep schedule is not fun.

Ah well, a girl can dream, and dreaming of a bigger house with a room to myself and a fully stocked Copic collection insures my dreams are quite sweet!