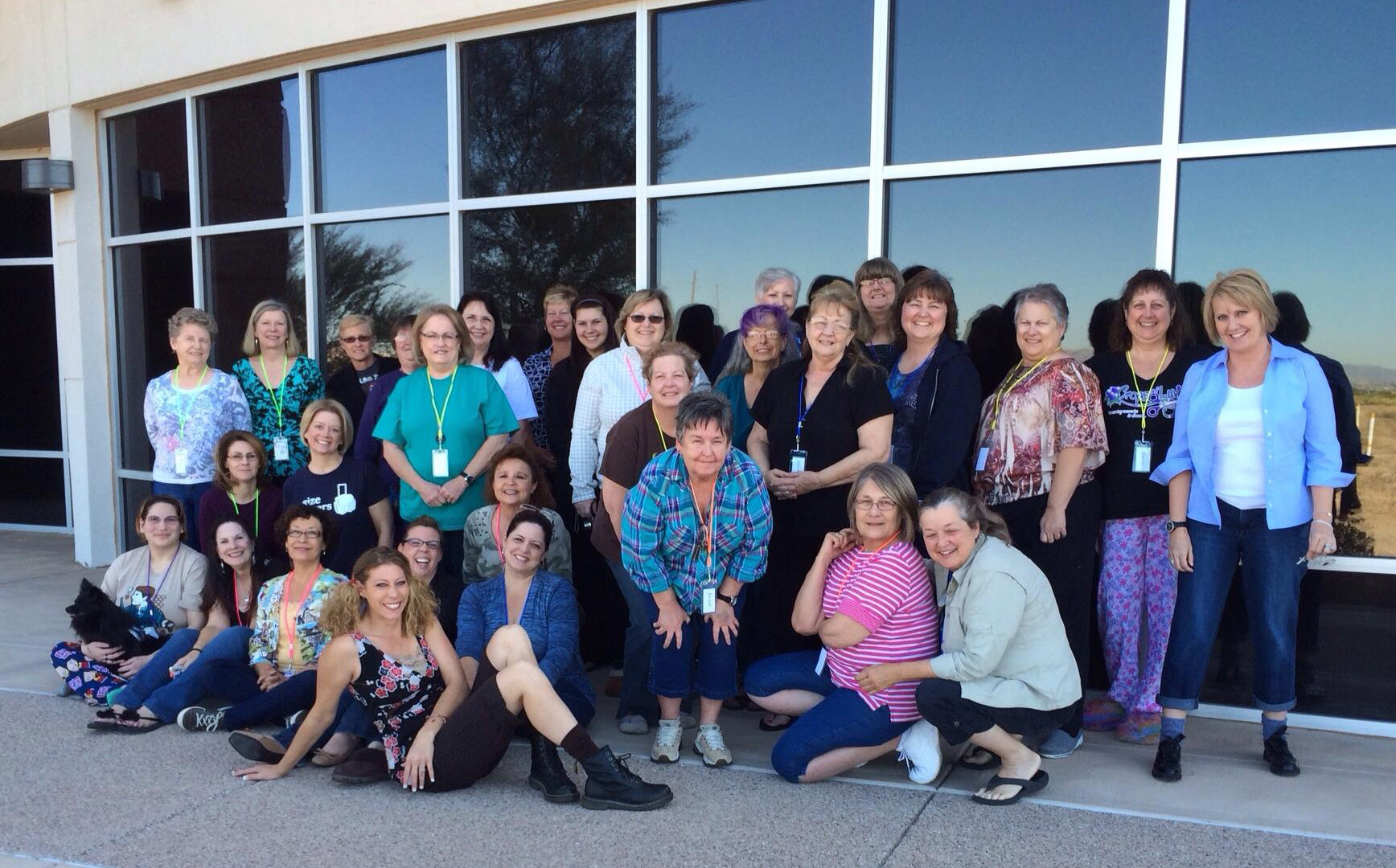 This weekend I went to my second Copic Boot Camp in Chandler, AZ, put on my Jennifer Dove. I had a fabulous time! I went to her first retreat in 2011 with my BFF Katie, and wanted to go again, but Katie couldn't come this time. Jenn was a sweetheart and she promised Mike (and me) that she'd take care of me and, of course, I had Sirius to watch after me too. Since Mike had Viggo, and the hotel doesn't allow pets, he continued on to Tucson to spend time with his little brother.

The hotel is super nice. The retreat was in the same place in 2011 so I knew it was nice. Jenn made sure that I had a room next to her, so she could make sure I was okay. First I started off with a handicap room across from her, but after I got back to the room after the first night my room REEKED of pot smoke. I called down and they moved me to another room; the hotel gals smelled it when they delivered the keys. I ended up with an elite room, which was pretty cool. I even had a couch and a desk, which I might have used if I were able to do more than sleep and shower. It was pretty nice to have a room all to myself for a few days, and I got to have the room absolutely frigid. It's nice to have air conditioning. I left Sirius' plastic bone in the hotel room on accident though. :( 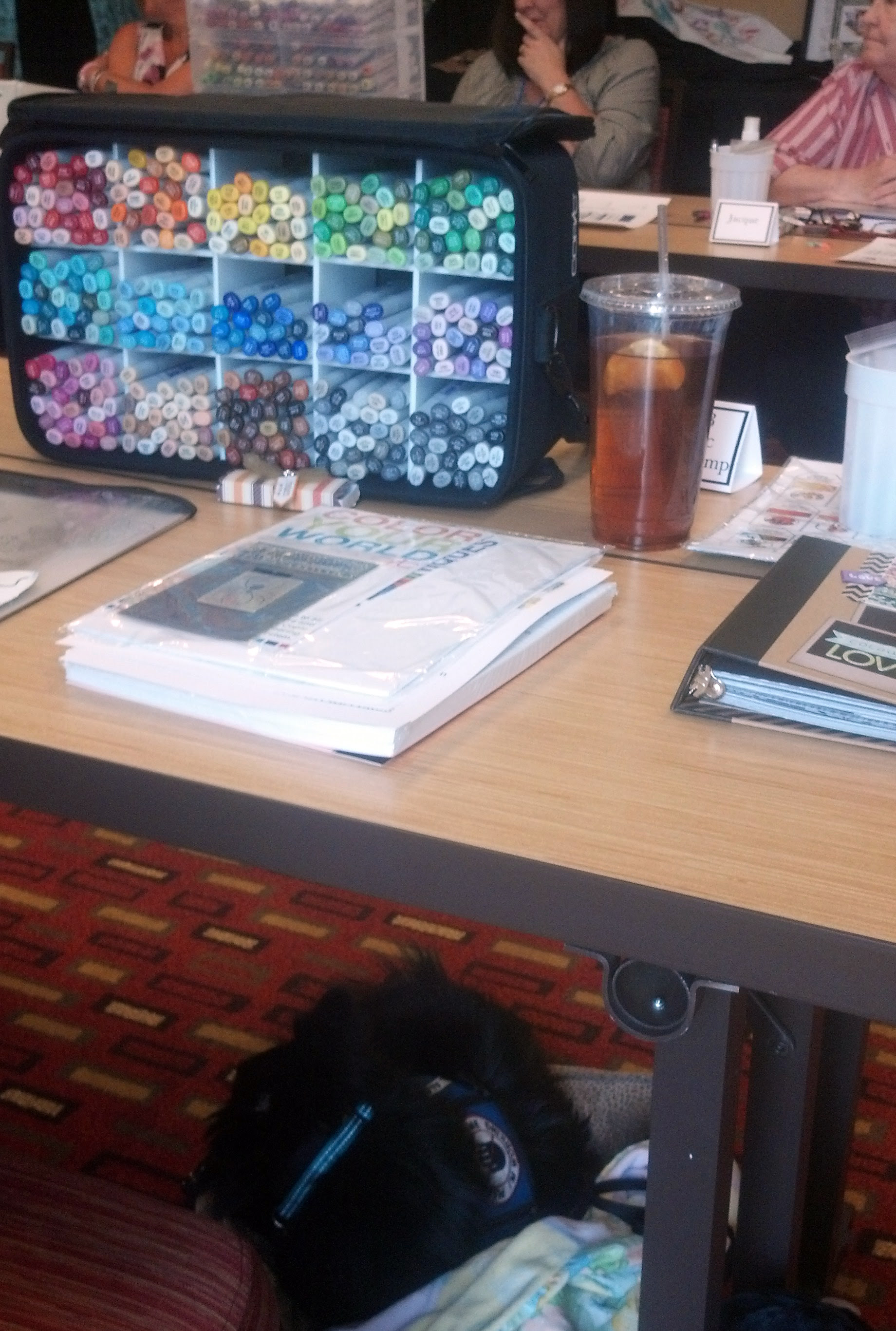 This is my spot. Jenn made sure I was right up front so I'd be near her and by a door so it'd be easy to take Sirius out to potty. We had a little worry that people might be allergic, but the one gal was able to move and the other was cool and just stayed across from us. As a friend of mine commented that colouring must be nice because it's pretty easy to keep neat. I still spend the weekend cleaning off my area obsessively, lol! Sirius was pretty good, spent his time sleeping under the desk near my feet like he does at home and wandering to the end of his leash to make friends with everyone. He made a few barks, and Saturday he was pretty growly, but he was still such a good boy to have around. 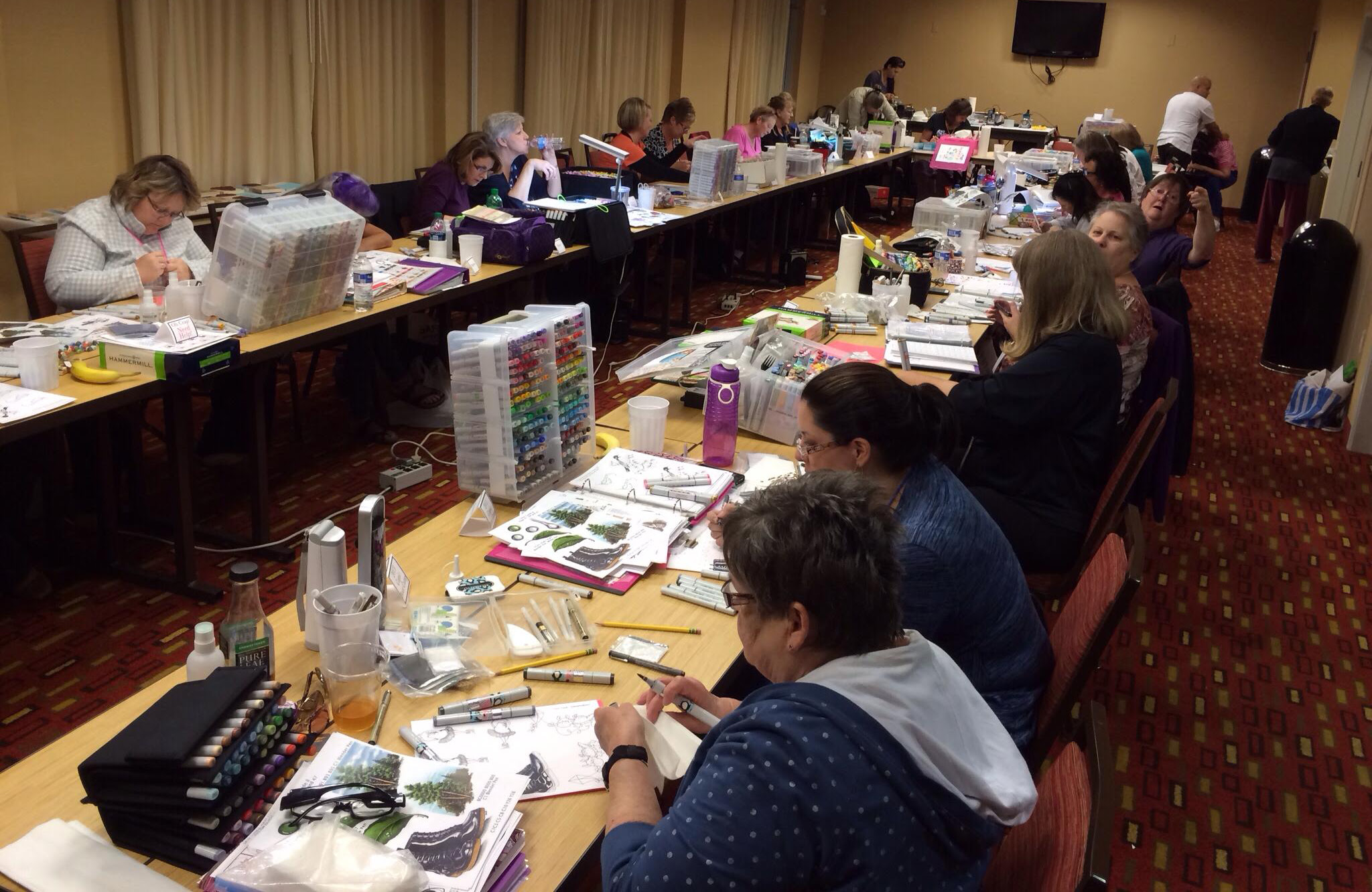 All the gals were pretty super. The tables being in a U shape this year really helped with Jenn being able to talk to us all and she had a microphone (though it was fussy) so she was easier to hear this time too. It was interesting to see how everyone stored their markers and how they coloured. Since I'd been before, and I colour a lot, some of the stuff was review but it was still an interesting exercise. 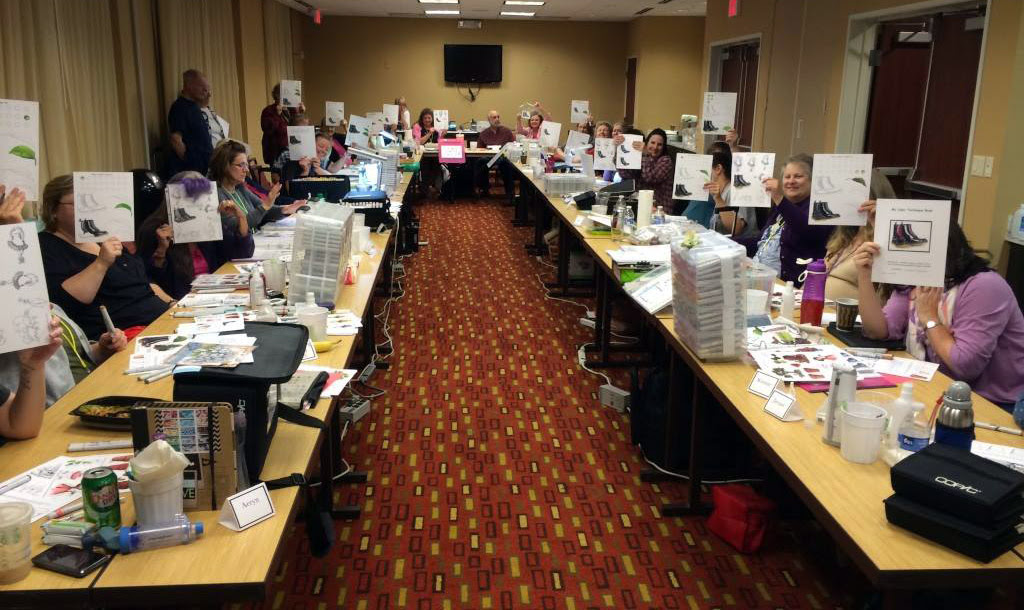 We did new stuff too, like the boots we're all holding up (you can see my arm and my place over on the left, but not me). For some reason people were saying they were scared of colouring this image. I mean, it was like a challenge, but it was nice to do something like that. They were all grumbly. ((shrugs)) I don't really get it. I mean, we're there to colour! lol! It's not scary, it's fun! 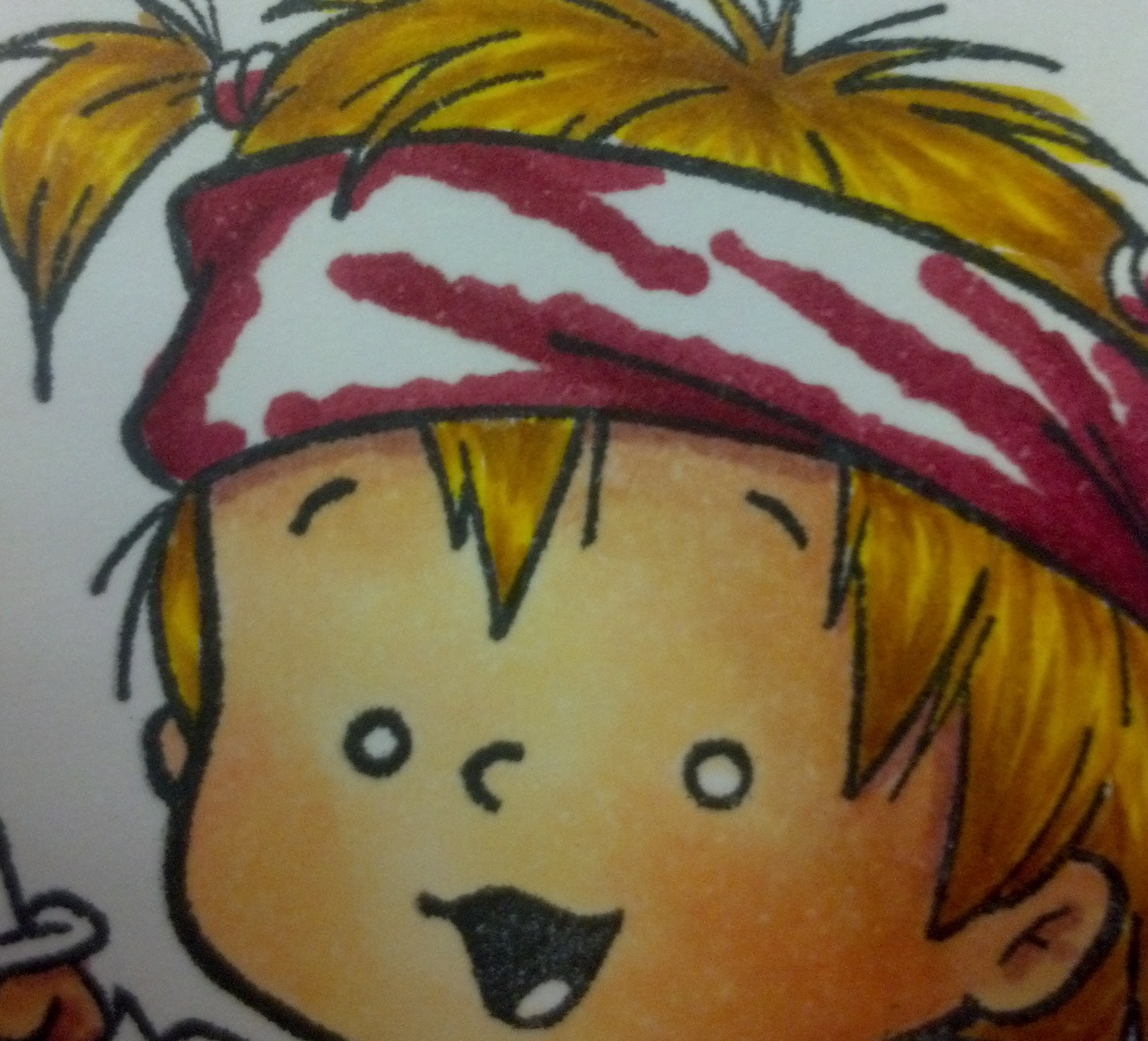 The only problem I had was I couldn't really breathe for crap. I ended up sucking on my inhaler too much and then shaking like an utter freak. See those red lines? Yeah, they were supposed to be straight. That was me TRYING to draw straight. Just shaking all over the place. That, and on Sunday my tummy hurt so it was super hard to concentrate. And I missed some stuff cos I had to keep leaving. That part totally sucked. Sirius was all over me too, doing his best to comfort me. 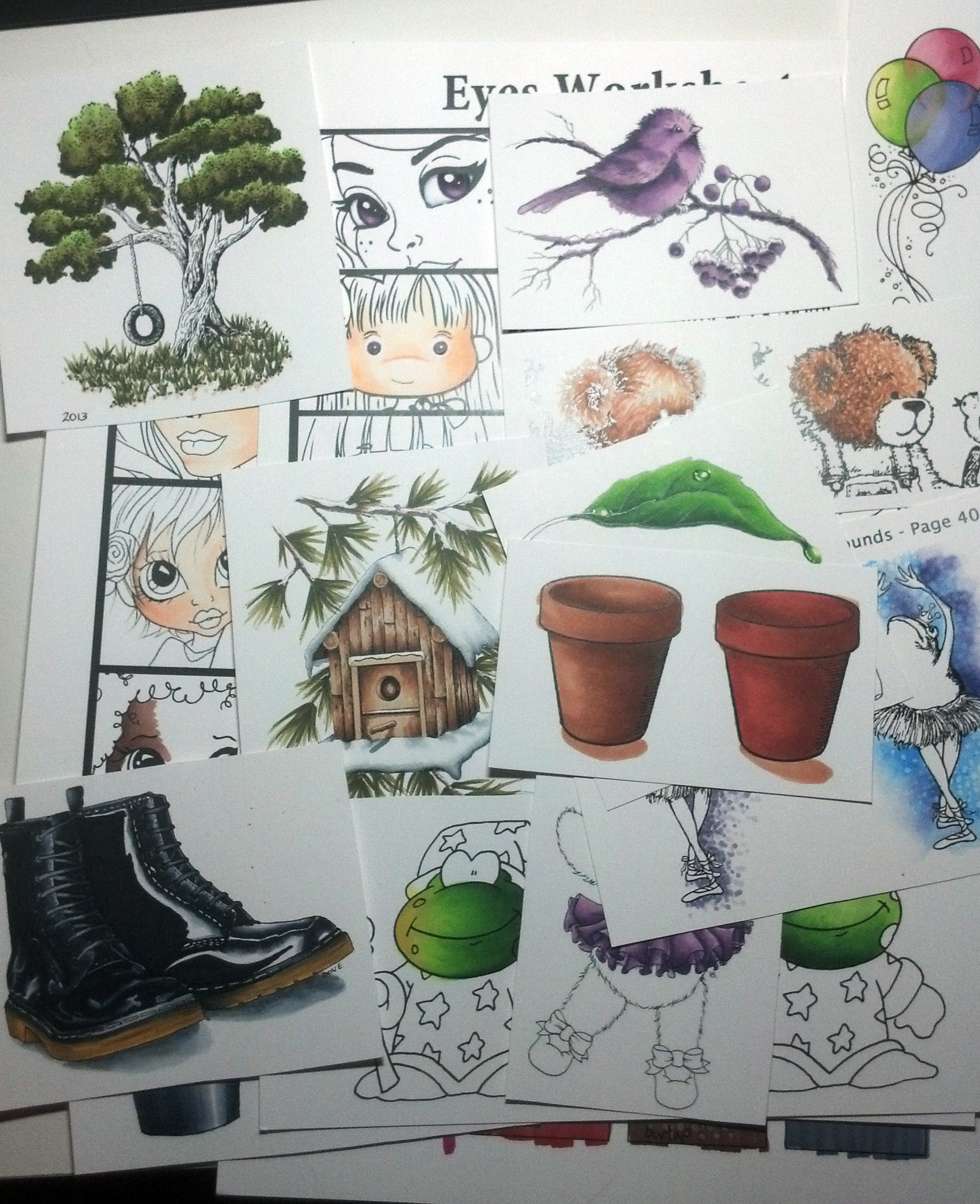 Here's a sampling of what we did, including the boots. We got new images for the skin and hair and eyes, which was nice to play with. We also got super cool goodie bags of stamps. There was a little store of adorable images there too, but I stayed strong.

I did my best to combine both books I got from the retreats, and I'll work on the images again to get them complete for future reference. Anyway, I had a lot of fun, and it was SOOOOO good to get away from Big Bear for... well, it's always good to get away from Big Bear for as long as possible. I'm hoping if I start saving now I can make it to next year's retreat. It's nice to get to hang out with people that like doing what you like to do and there was new stuff to learn which is good. You should never stop learning!