First off, I'd just like to say how sorry I am for not being around. If you're a follower here or on my FB page you probably know I've been rather sick since starting Cystic Fibrosis medication on the 15th of February. Since then it's been one thing after another, including several days last week that required me laying in bed doing nothing at all in an attempt to heal. I was able to keep in communication because of my tablet, but I wasn't able to do a whole lot, and I'm sorry for that. I'm still not better either, so I'm taking things day by day.

Because of all this the exciting reward of getting to go to the Anaheim Scrapbook Expo after doing the medication turned into something that I hoped I'd just be able to claw my way to instead of  haveing some sort of crazy awesome celebration time. I was told by the CF doctors that I needed to come in to their office on Thursday the 20th for tests and while that part sucked (we came away with no answers as of yet, even after me being poked and prodded and tested for over two hours) the timing was actually okay since the Scrapbook Expo started on Thursday this year. A gal from my message board arranged to meet me when we got there and, with Mike trailing behind waiting to purchase things and carry stuff for me, we were able to do some fun shopping together. 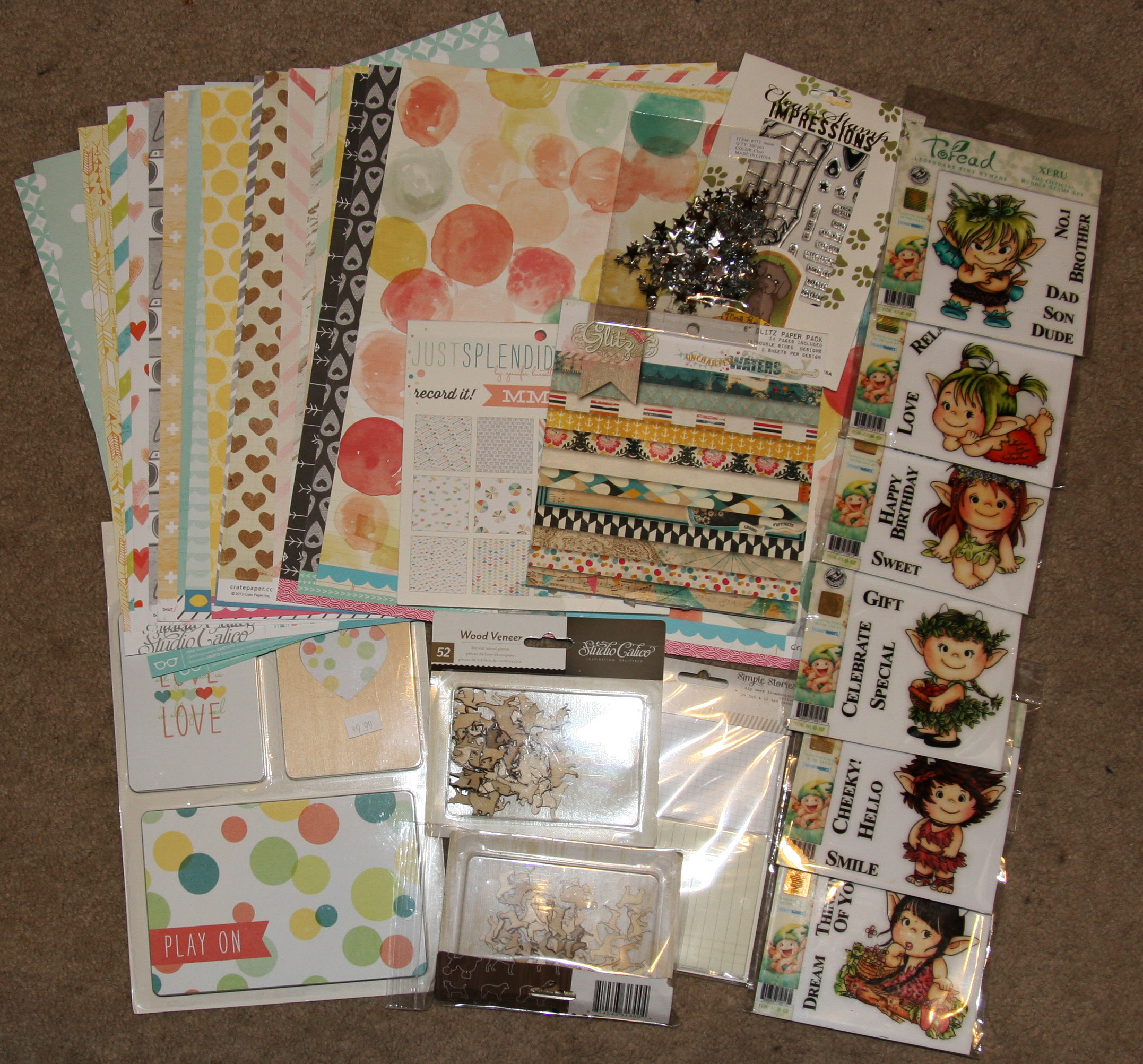 I ended up getting "only" a few things, mostly stuff I'd been considering for a while but not purchased, as well as some things from Winter CHA that I knew I wanted. I got the MME Just Splendid paper designed by my friend Gennifer Bursett which are really beautiful in real life. The PL cards are a bit thin, like regular paper, but I think that might be a good thing since there's three of each design I'll probably be layering them on other projects. The little troll stamps I've been looking at for a few years now and always pass up because of the price (10). Mike said to go ahead and get them though and they really are quite cute. They were also "buy 5, get 1" so I was able to get the whole line, even the one on the bottom that I'm not as fond of. I just figure she was my free one, hehe. I picked up a 6x6 of Glitz's Uncharted Waters which I've been considering as well as the Studio Calico wood veneer kitties and doggie sets. I found Simple Stories' DIY grid PL cards which are really nice, also a little thin, but they're made to layer things on top of. I found another USA map stamp set with some really cute sayings for $6 that I can see using on several projects. Last but not least I found some new CHA paper by the sheet. Definitely things I needed to see IRL. For the first time in years I liked a surprising amount of Crate Paper's new release, as well as Dear Lizzy's Day Dreamer, and Studio Calico's Wanderlust. I only ended up buying two sheets of Amy Tan's Plus One that they had because I wasn't really fond of the patterns. I saw it at another booth later, it looked like they had more pieces, but I still gave it a pass. I'm usually a fan of her stuff so it was good to see it in person and know I could do without it.

Saturday was the day of the big group meet so we decided to go out again. Not something we'd usually do, go down the hill twice in one week, especially so close, but we needed boring things like dog food to make the trip more legitimate than both Mike and I wanting to play with friends. The drive is about two hours, two and a half, so we try to limit how much we go out. But this time the excuse was not just to spend money so it was okay, lol!

Susan, the gal I'd met with on Thursday, had organised as many SoCal Peeps meeting up on Saturday as she could and it was her, Jeanne (who I went to the Ontario Expo with) and my friend Sue that I met up with first when Mike dropped Sirius and I off. We hit the Echo Park booth first, HARD, and then continued to wander around the floor in a haphazard kind of way, just talking and shopping and hanging out. 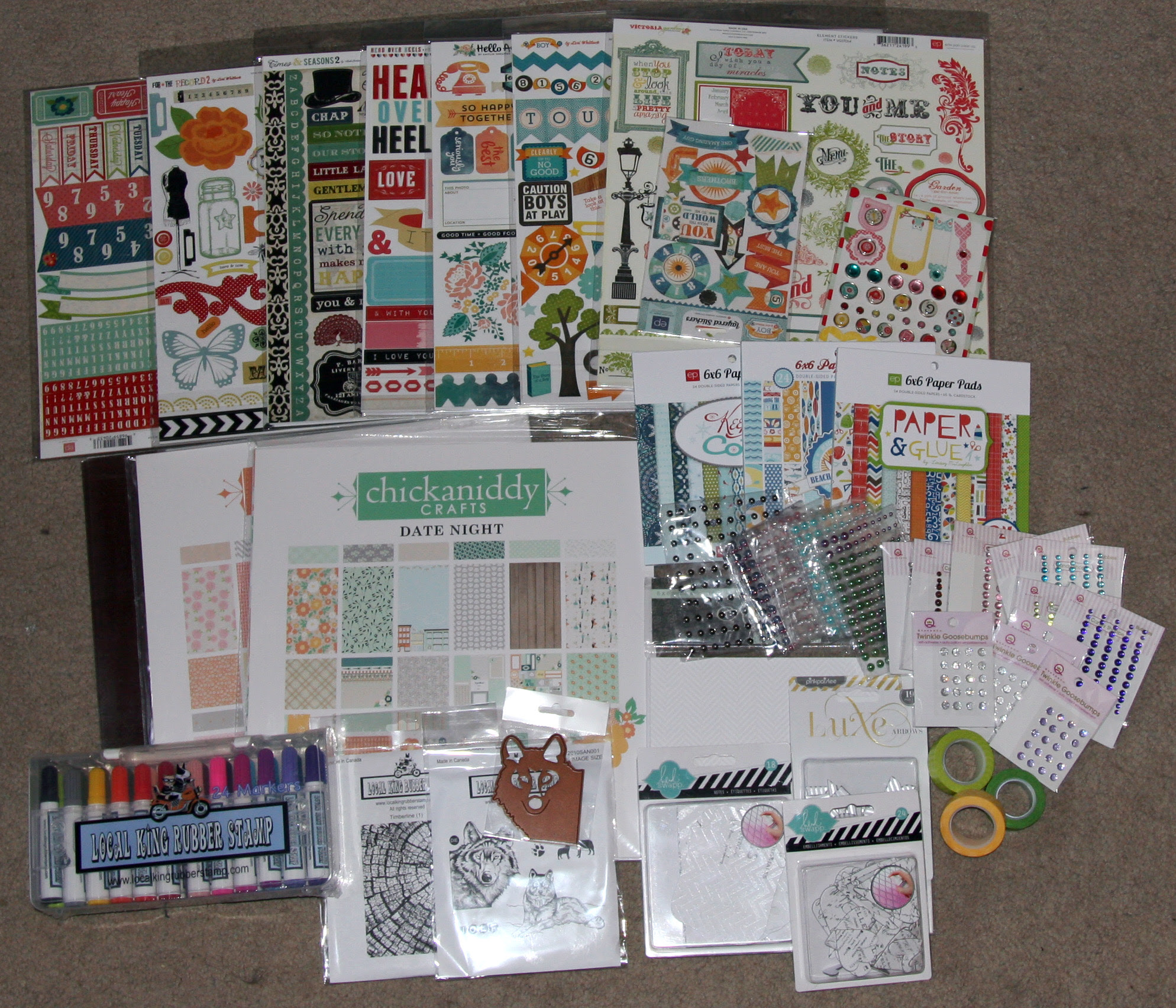 Up top you can see the Echo Park stuff I got. They had a "buy 7 packs for $20" deal going on which was definitely the best of the show. A collection pack with stickers is usually, what, like $15? Sometimes $20 from other companies?  I've used some of this paper already, or have a few pieces left in my stash, but we're thinking lean times might be coming in the next 4 months or so so I thought that having a stash of new paper like this that I know I like might be a good idea. Just in case. The embellishments were only a $1 so I got a brad pack and a layered sticker pack. They also had sets of divided page protectors for $2 instead of the $5 for the WRMK ones at Target so I got 4 of those too. The 6x6 were 10 for 10 so I picked out three to help Sue get to 10 and she bought them for me. I raided the Queen and Co booth again for some washi and more bling since I've used a lot already. Sue also bought me the pearls in the clear packages while Siri and I were outside so he could potty. I got some Pink Paislee mistable shapes and paper which should be fun with my Dylusions. On the bottom I took advantage of a deal at a place called Local King rubber stamps. You buy the stamp set, a background stamp, and the water-based markers for $40 and they threw in 2 packages of glossy paper (of which I have none). I also bought the matching wolf die because it's the kind that cuts the exact shape, not the kind that leaves a white border (which I hate). Lastly we stopped by the Chickaniddy booth a second time so that Susan could decide if she wanted to buy something (she likes to ruminate on purchases) and it's totally her fault I broke down and got both collection packs for $8 each.

That's it! That's my shopping adventure at the Expo this year. I think I'm set, right? LOL! Thank you for coming, dear readers, and for hanging in there with me during this whole medical hoopla. I've always known CF was a serious disease (it's technically terminal after all), but being this sick for so long is something I've never experienced. I hope to be on the mend and get back to sharing things with you this week. I have a new card already, and a second part to this Expo Love post with pictures of the Peep gals so please stay tuned.