Today I have a pretty big reorganisation to show you. In fact, it's been a few weeks in the making (and those waiting for it are probably not anticipating it anymore because it's been so long...). While I was at the Anaheim Scrapbook Expo my husband Mike went to IKEA for me and picked up an Alex drawer set for my space. This is its story.... 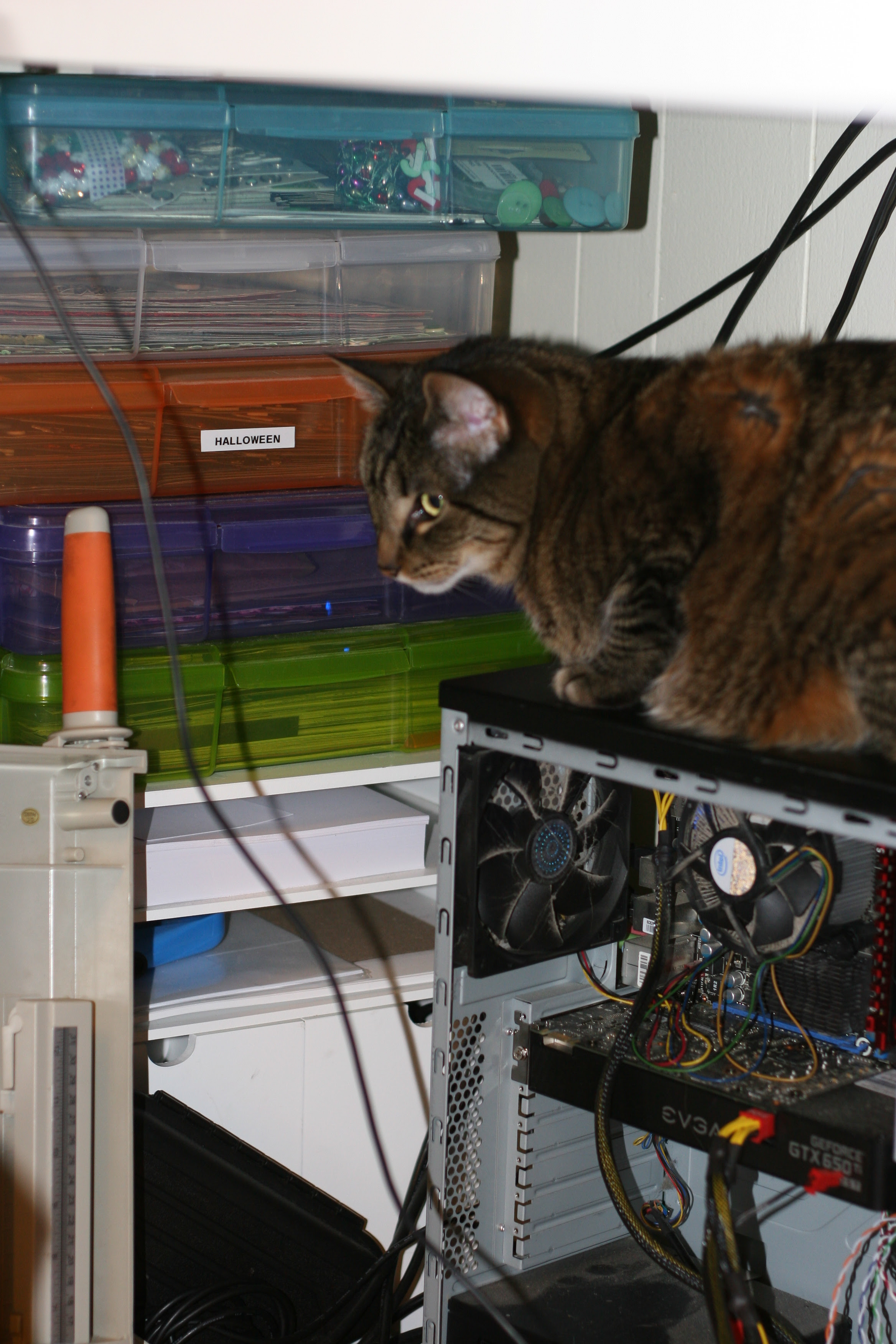 This was the space under my desk. My "footwell" if you will. My computer tower with its side off to keep it cool was accompanied by a disused Jetmax Cube holding my Copic paper and not much else important. On top of that were several Iris cases including my Christmas supplies. When I needed a snowflake wood veneer I had to have Mike go under there and get that Iris case out of there (it was on the bottom stack at the time). And then there's Gambit. She's taken to sitting on my tower in the last few months and pawing at me for attention. I also think she likes it because it's warm. 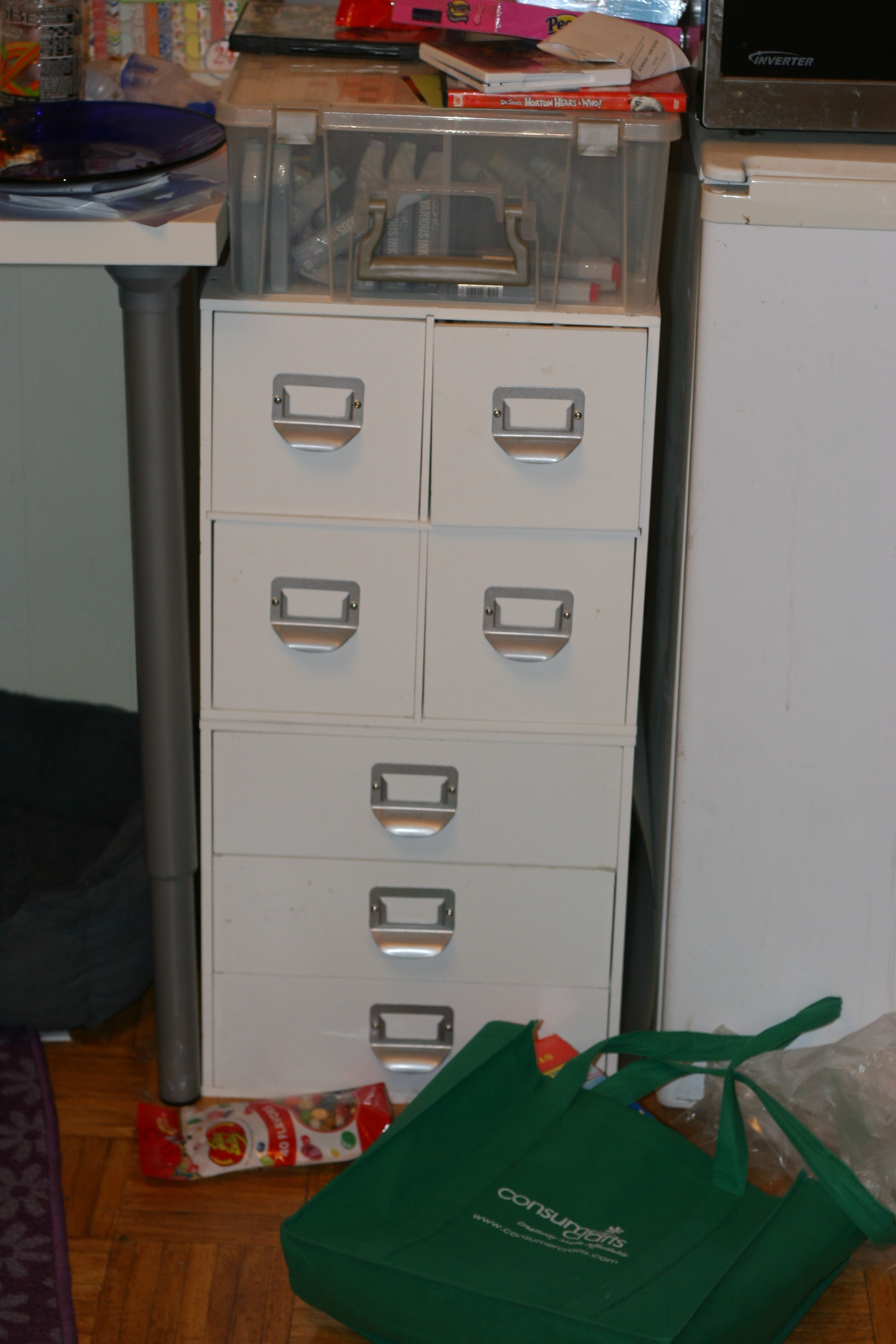 All the way on the other side of my desk were there two Jetmax cubes that I'd been using to hold up my previous desk, still stacked the way they were then. The problem with this was that all the important stuff was still in there and yet wasn't as close to hand as it had been. It was just a little scoot over with my chair, but still, annoying. Also, my chair sits higher now with this taller desk and getting to that bottom shelf where my important tools were was rather uncomfortable.

I also had a wooden shelf that Mike built me for my Mason jars several years back. It used to be mounted on the wall in my scrap closet but since the move to the kitchen it's been rather... out of place. With the bigger table it has been even more so. I thought perhaps I could replace it too. So that's four things that needed re-homing and re-organisation. 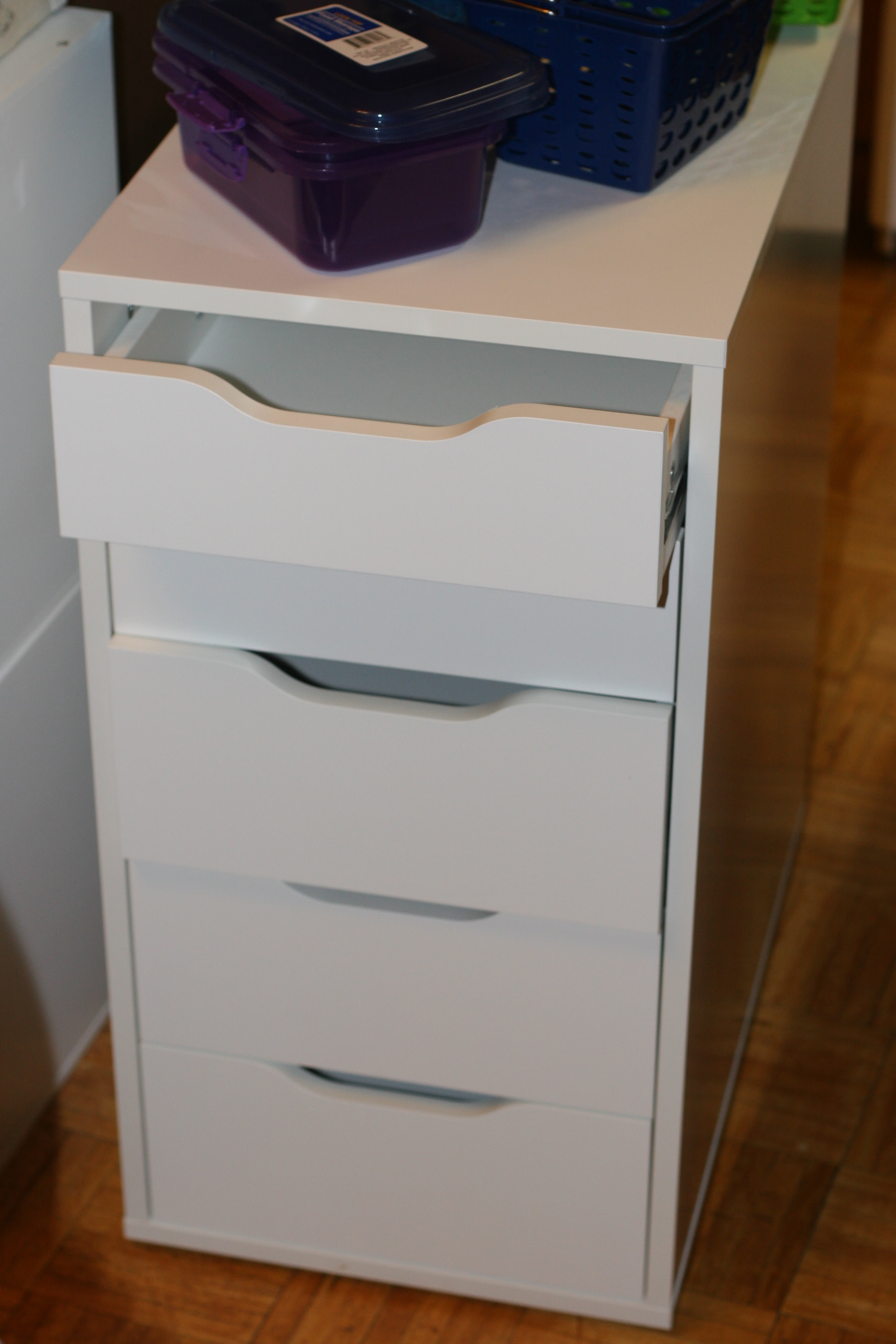 So I cooked up the idea that I could get ONE unit, the Alex unit, and replace all three of these Jetmax cubes. I mean, I hate the idea of wasted space and if we EVER GET TO FREAKIN' LEAVE THIS DAMNED TOWN it'll be less to move. Mike put it together for me in the morning and I got to work. Pulling everything apart, making a general mess of the kitchen, and sorting things I *do* use from the things that I don't. I quickly realised that I'd need some help in the form of organiser bins so we took a trip to the Dollar Tree. We had to go to the store anyway, since we needed lunch, and they're right next to each other. 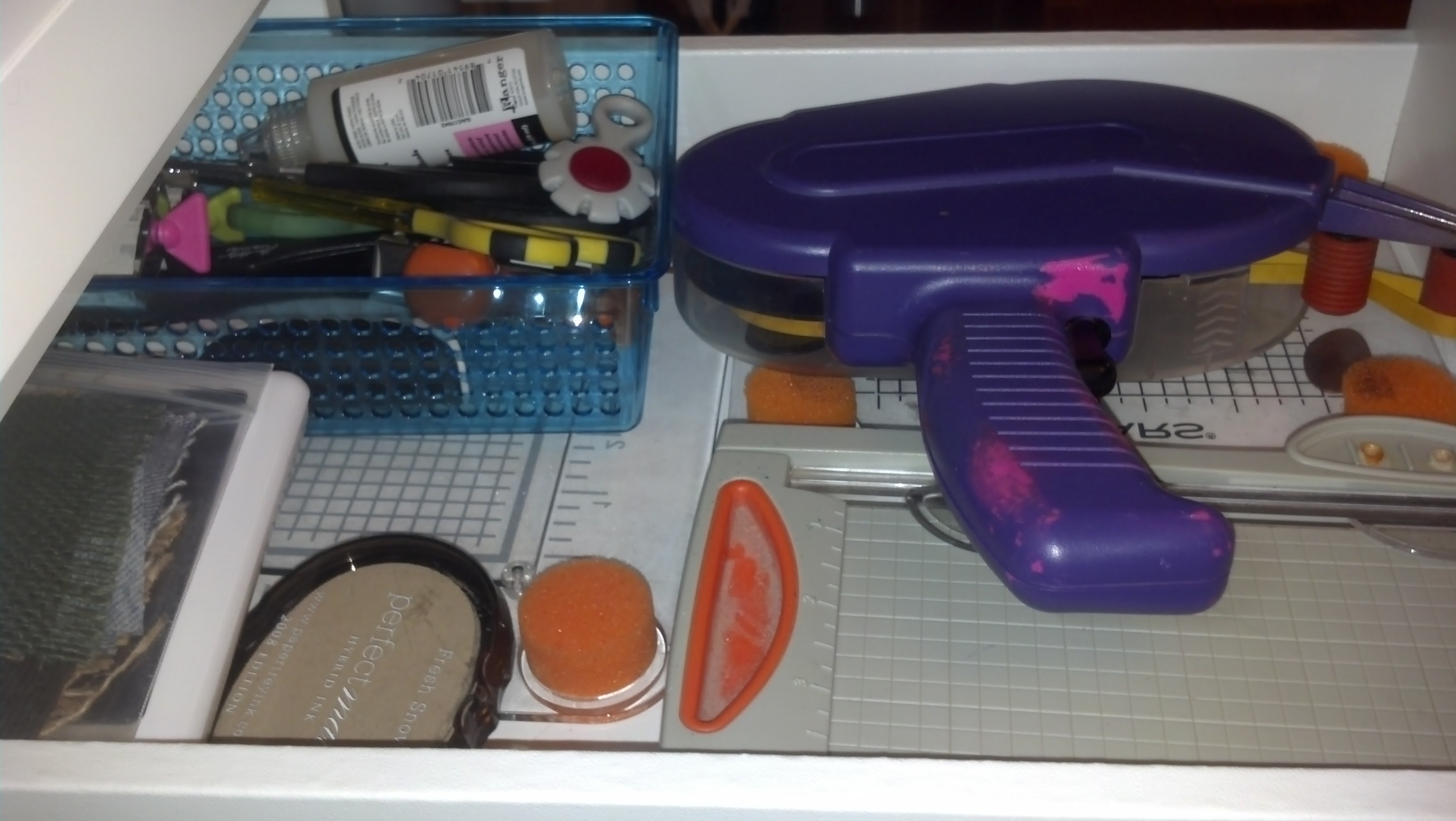 The first drawer was easy. It's the main tools that I use when creating. My smaller trimmer, my ATG gun (which needs a coat of spray paint again and a sealer), my large ink pad, and assorted extra scissors, Cameo tools, and Glossy accents. It's right at the top so it's very easy to reach into or to leave open as I'm working. 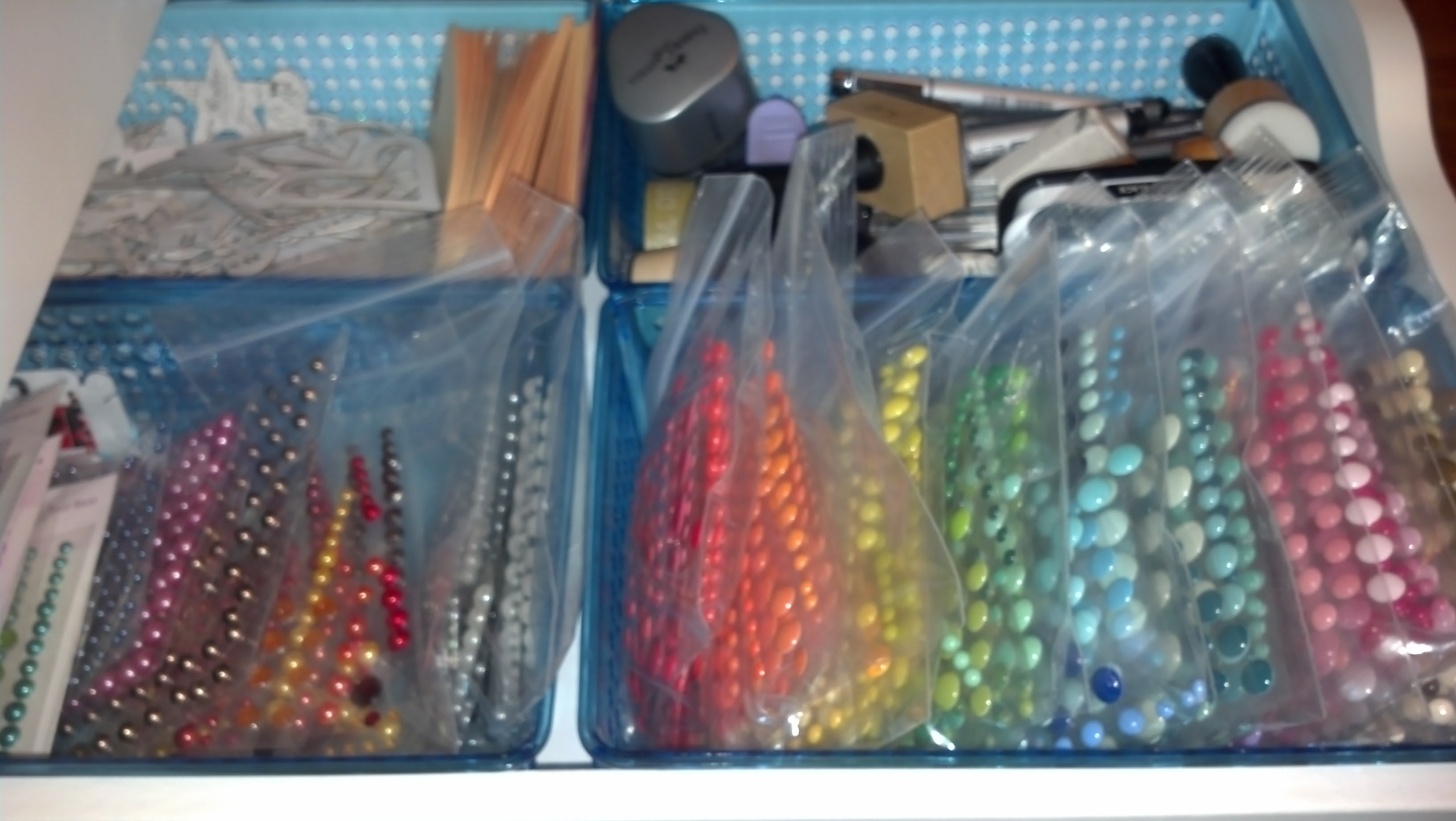 The second small drawer I put shallow bins in and put my enamel dot and pearl collection in prominent place. They're used super often, I have an addiction (we all know this) and it seemed like a logical step. The far right bin has more tools in it, blender tools, corner punch, Copic Multiliners, my main Memento stamp pad and acrylic block, my pencil sharpener, stuff like that. In the far left bin I had a bit of a struggle to fill since I don't have that many little things. I settled on Heidi Swapp mistable shapes and my manilla tags that I use to play around with mixed media things. 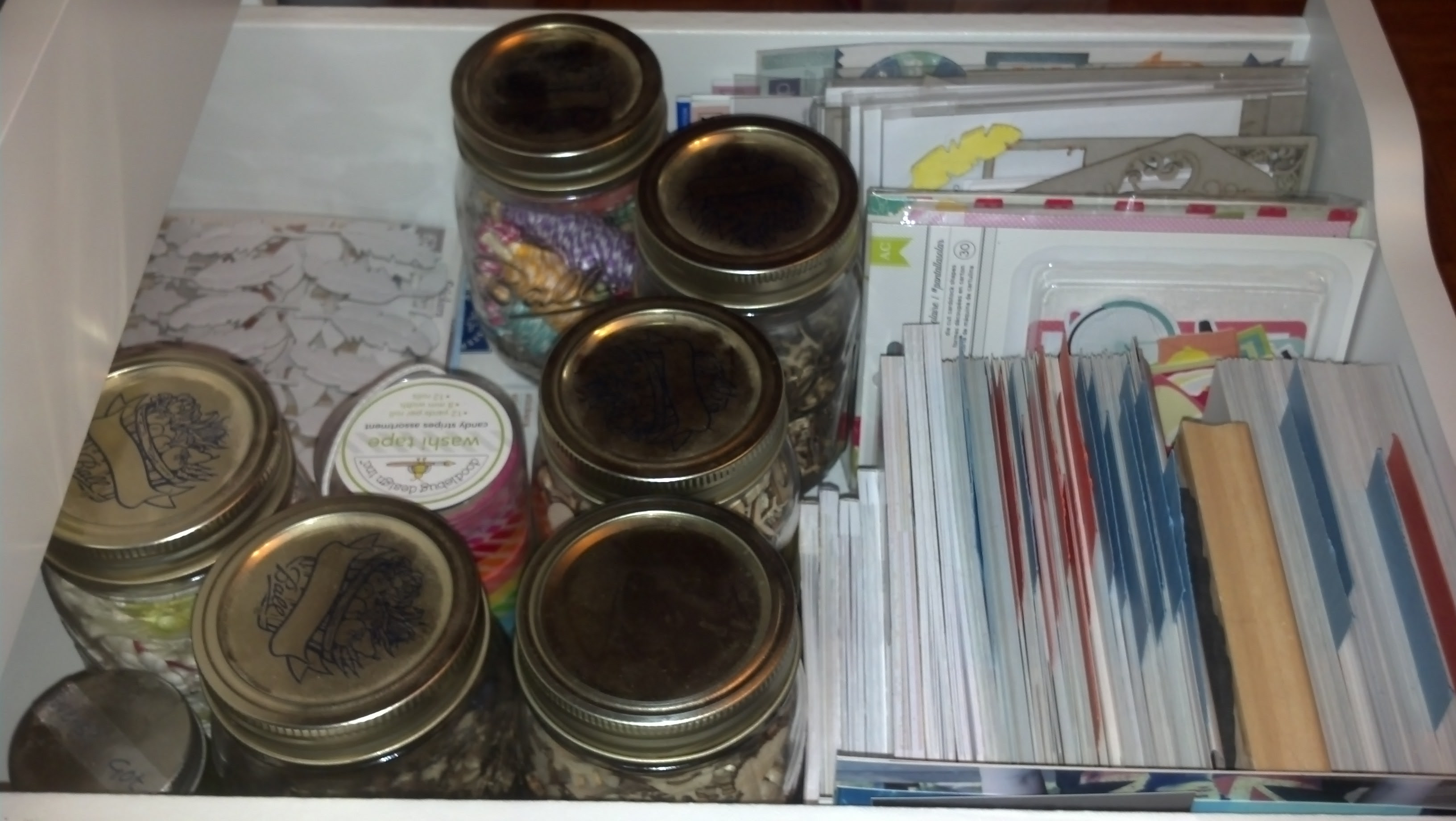 The next drawer is the first of the larger drawers and happened to be the exact height that I needed for my mason jars. Most of them (4) have wood veneer in them. There's also one for twine and one for white flowers for misting/Copic/inking. I used this drawer for my pre-printed photos as well. If an event has multiple photos, like hundreds even (think Disney World), I send them out to be printed instead of having my Selphy do it. I also put in embellishments. I had to do a stack (top left) as well as file them (top right) because some were too tall for the drawer. I don't use a ton of embellishments like this so mostly it's mistable shapes a few old Jolees that I have specific use for, Make it Crafty chipboard, and one package of die cuts. (oh, and that's not a stamp in there, that's just a wood block acting as a separator to keep the Disney World photos apart from the regular ones. All the other dividers are for subject division) 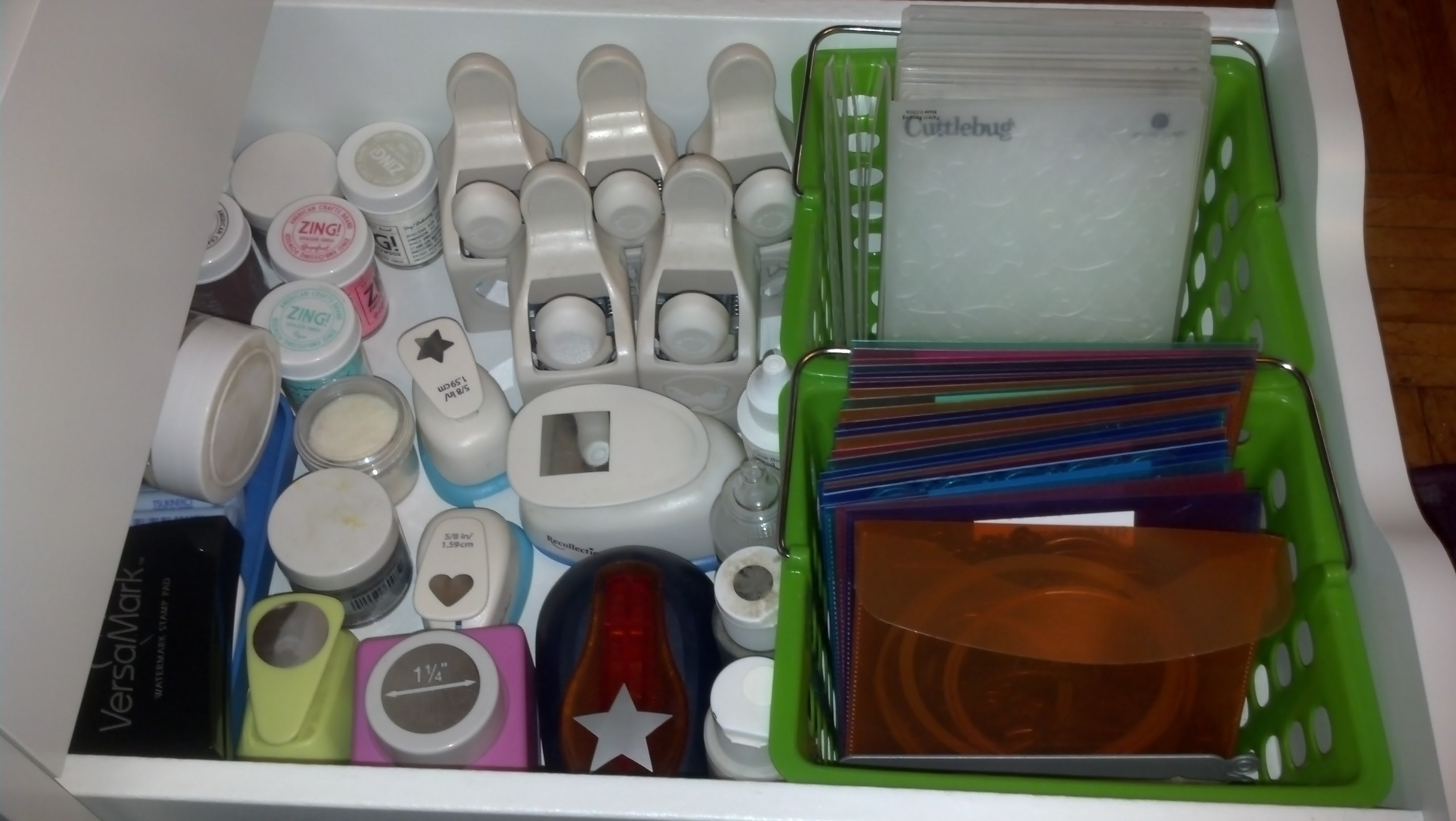 There's one more drawer in this unit but I'm saving it for another Monday, so stay tuned! 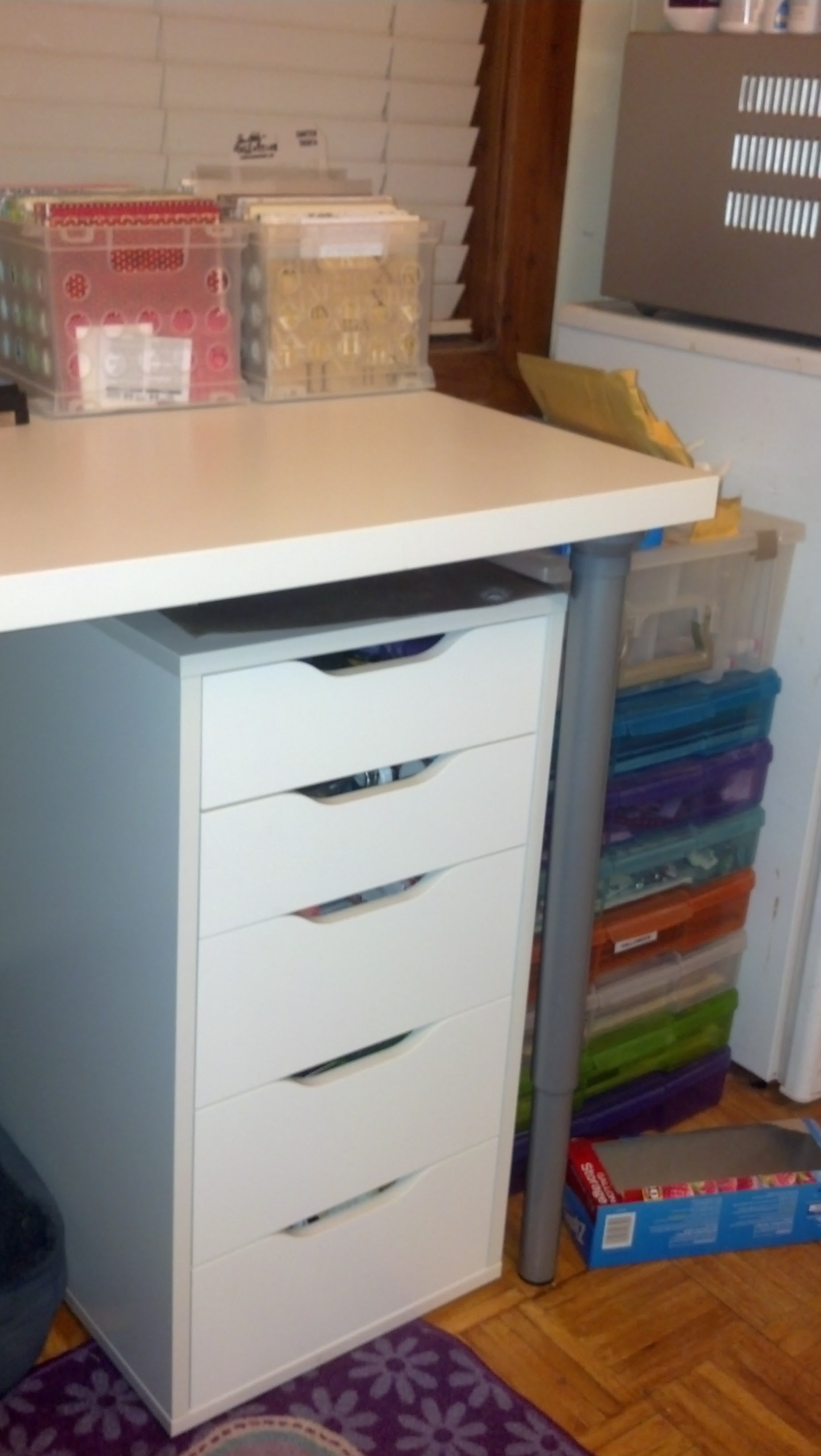 Here is the Alex unit all in place. I'm slightly bothered that instead of drawer pulls it has non-sealed drawers, but I'm dealing. There's not *that much* dust in here. I'm sure my stuff will be fine. Over to the right I've re-created the Iris case tower since there's really no other way to do it, but at least it's easier to get to. My Copic refills in their Artbin sit on top. 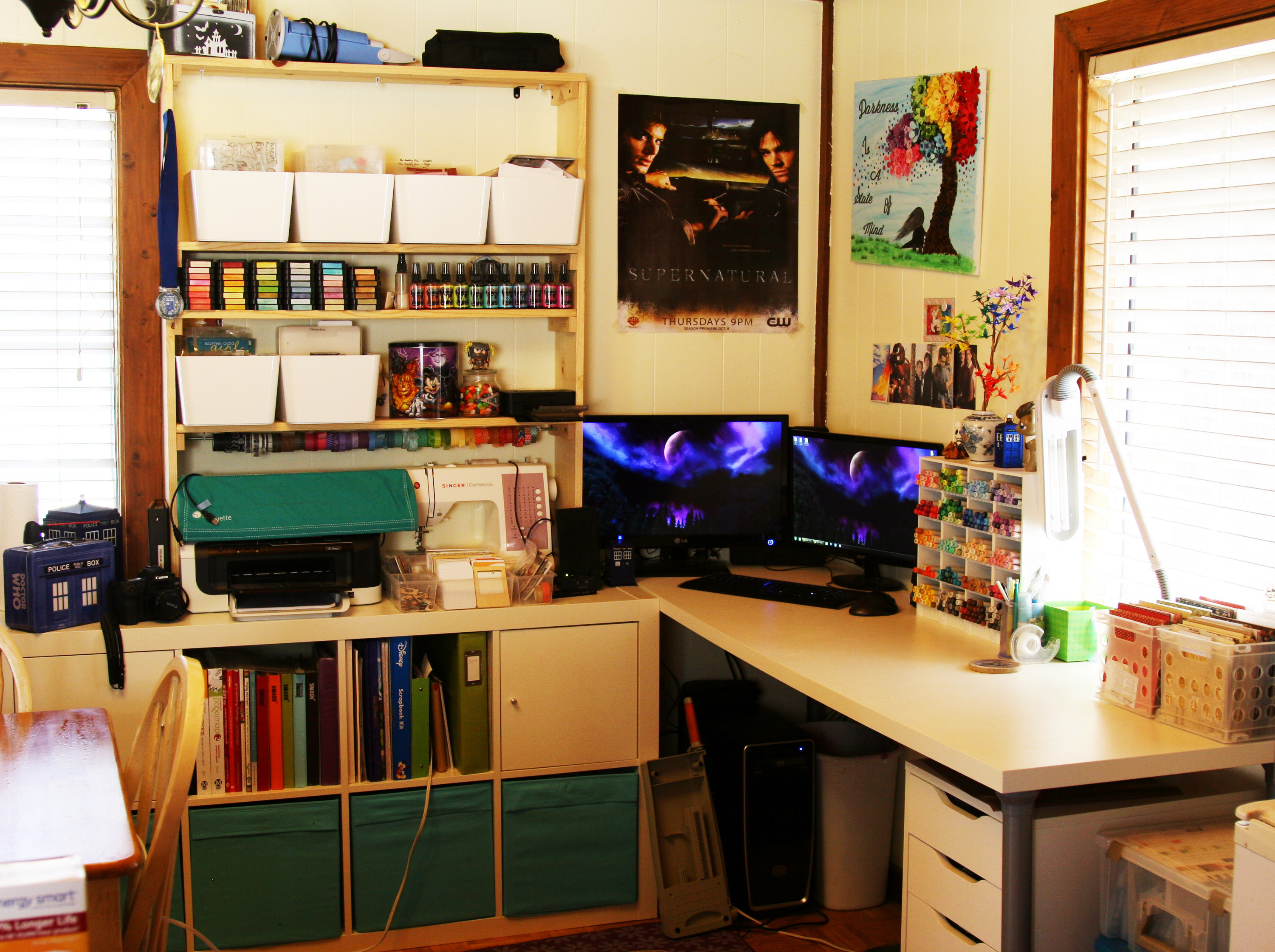 Lastly, here's the full shot of my space as it is. It's still not fully, completely, totally, done which is why I haven't made a new tour video, but I'm getting there. Just a few bins in the Expedit to organise and the white stamp bins on the wood shelf need sorting as well. But you can see how nicely the Alex fits into the space now and how it's made things in this corner a lot easier.

There we go! Three cubes and a shelf down to one drawer unit. Yay! I hope you've enjoyed the look around my space today and I hope you have a wonderful day. Stay tuned (nearly) every Monday as I bring you more organising fun!