Hello, all! So sorry I missed Project Life Sunday, but we were out rather late on Saturday and Mike has been rebuilding my computer all week so it's been a bit of a struggle. This week, instead of Studio Monday, I bring you a view from the San Diego Scrapbook Expo. The last time I went was in 2012 (you can see that adventure here) and I thought that since it fell so close to my birthday (within the same week at least) this year that it might be fun to pop on over and see if there was anything interesting. Mike was game; took very little convincing actually since his work friend recently moved there and beaches are nice. It was in a different location than the one we'd been to before, this time it was located in Hotel Row or whatever they want to call it. It's near Sea World and has a TON of hotels there. It's a good thing we arrived early, at 9am when they opened, because the parking at this location was atrocious. It fit the space better though. Instead of a huge space that they couldn't fill with only a few vendors in attendance they filled the room up and made it look more populated; though still quite lot smaller than the Anaheim Expo as usual. 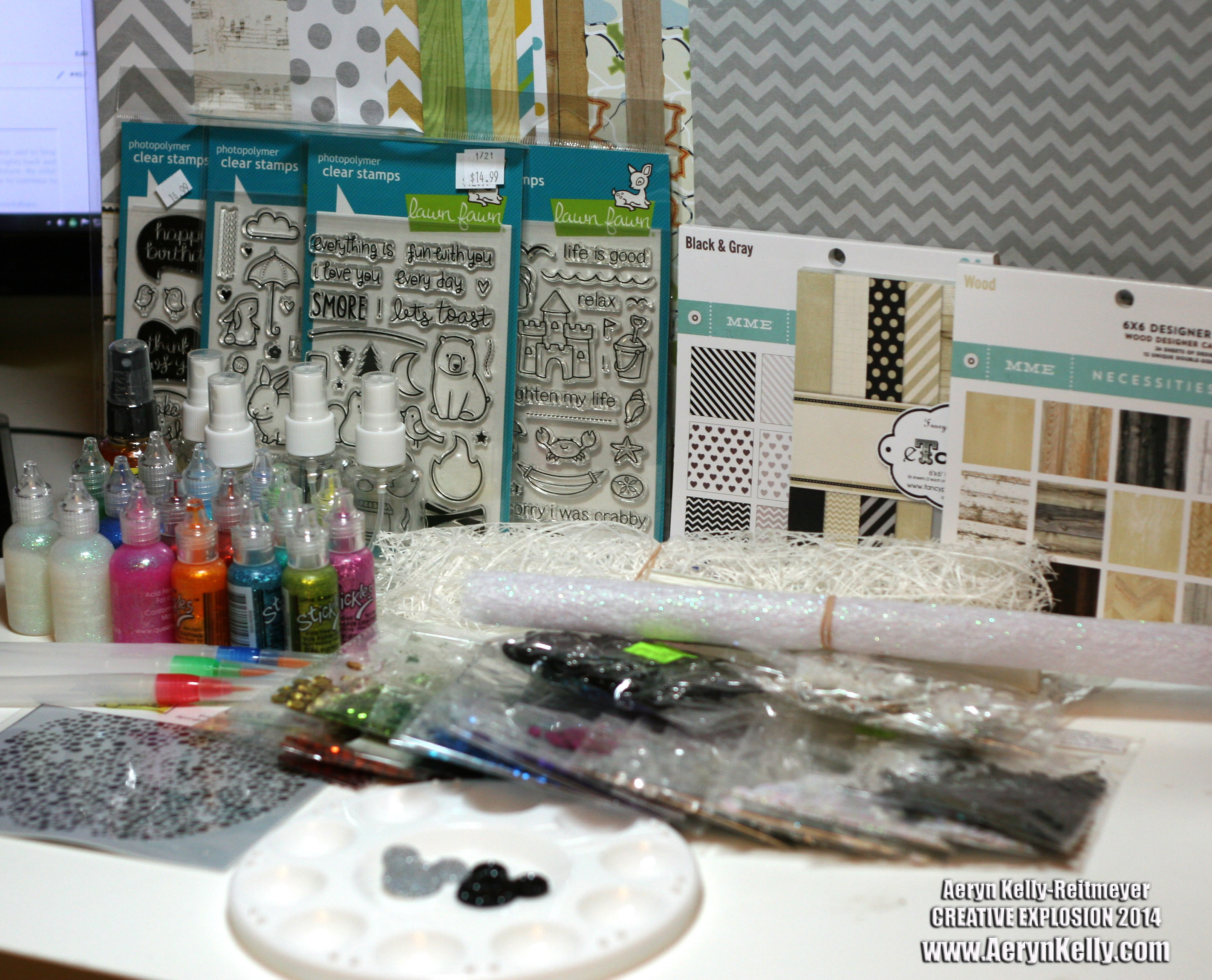 I'm happy to say that I found some really good deals this time around. Tall Mouse was the best. I'd gone in telling Mike that I wanted to find the Doodlebug sequins, since I need more, and consistent, colours for my art canvases. We get to the Tall Mouse booth however and they have the entire rainbow of sequins for 50 cents a package. They also had some interesting texture fabrics, some fabric/wire butterflies, and some empty spray bottles for a dollar or less each. When we went to check out it was $19 and she said if I got one more dollar I could get 2 free sequin packages and those little glitter Mickey heads as well as a Mickey tote (like a fabric grocery bag) so I did happily got some duplicate sequins. I got 8 bottles of Queen and Co branded glitter glue since they were a dollar and another booth had Stickles for $1.50 if you bought 8 or more. Now I won't have to worry that I'm running out when I use them on my canvases.

I got some 12x12 paper, mostly Simple Stories, and got a deal on the three 6x6 pads 3 for $10. I focused on getting paper that's good for backgrounds since I have so many nice patterns, but not enough backgrounds to layer them on. I also got a plastic painting palette, several water brushes to fill with mist ink, and Lawn Fawn's new releases. They were $15 each, but one was free, so that made the savings pretty good.

Well, that's my haul. Mostly art canvas stuff and basic tools this time around, but I think those are the best purchases, you know? And with such discounts I'm really happy that we went.
2 comments:

Mixed Media: Take Me Away 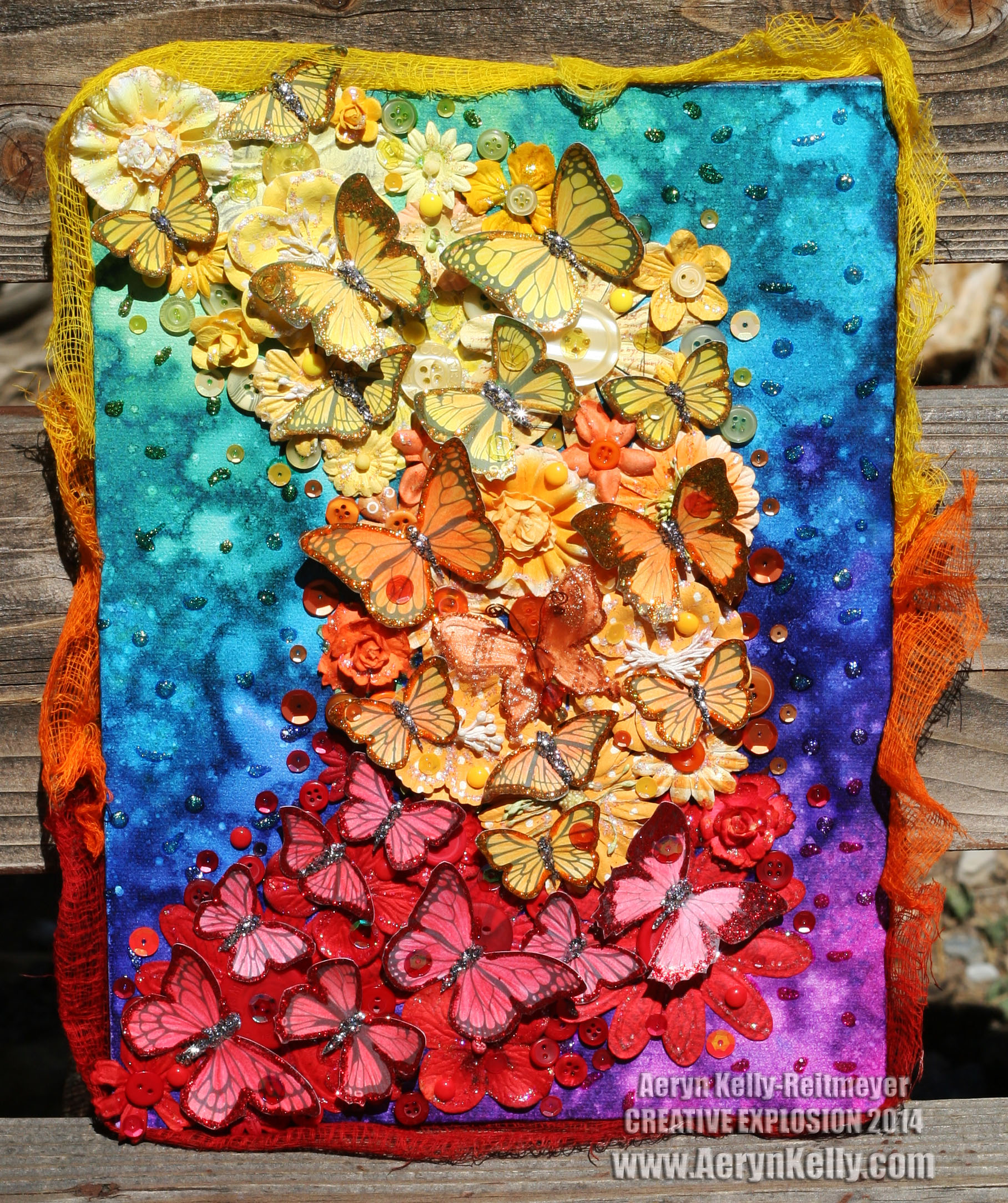 After making the video on how to make the mixed media canvas backgrounds that I do, I had three, count them *three*, of the same canvas. I had made one for myself, then the first video got ruined, and then I had to make the last video. Yeesh! Well, this is the first idea I had to use up the canvases. I like to play with contrasts so this was perfect *and* it used up a lot of the supplies from the last project. I added a lot more to this one, including coloured stickles and sequins, just to add more texture. I hope you like it! This was just as fun to make as the first one. It's 9x12" though, so it's smaller. It still took me 17 hours to make though. These things take a surprisingly large amount of work!

And a special happy thing, my very first, this piece sold for $100!