Colouring Book: The Witcher - Geralt vs the Ice Giant


DONE! my first page of 2019, appropriate since there's a ton of snow outside, is my Ice Giant from The Witcher. I worked from a few of my screenshots to do my best on this page and had a lot of fun with it. #thewitcher by @darkhorsecomics using #copicmarkers also an entry for @coloringmaja #creatuanuarycoloring #adultcolouringbooks #colouringforadults #colouringbook
A post shared by Aeryn Kelly (@aeryn.kelly) on Jan 6, 2019 at 7:53am PST

With it being officially winter here in the SoCal mountains I like to work on snowy pictures and I thought that the Ice Giant would be perfect for my (at least) monthly page from this book. My paint got pretty gross, trying to do the snow, but I think it worked okay in the end. I like the little bits of snow and ice the giant has on him in the game and I think I mimicked that okay with the Posca pen. I wanted to be more arty with it since the game can get away with being random a lot easier than I can in an image. I also had a fun time doing the hanging icicles. It was one of the things I noticed immediately from the screenshot, the moon lighting up the curves of the icicle curtain in the open cave mouth, so I had to give it a shot. It's not photorealistic, but I do like how it came out and that's all I can ask for.

This, among others from this scene/fight, is what I was working from. I wanted to make it a bit lighter, so it was more during twilight, but also some shots didn't have the glow from the little fire in the room so I cut that out as well. I wanted to show the interesting blueness of the giant himself instead of covering it with glow. 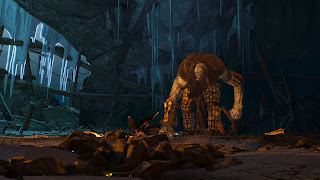