Funnily enough, I started this page as a "quick" diversion and it ended up taking me a few months to finish. I started off with Inktense because it's a lazy kind of chill colouring for me usually. I tried to do some details with my Polychromos but I didn't like the look I was getting on this paper with them. I had to put it aside and by the time I picked it up again I'd gotten the set of Prismas and decided to try them instead. I wanted minimal shading for the cute dogs and whimsical background and I like how I got that feel with the Prismas. I then painted the sky/background because it'd be faster than pencil colouring and called it done! My first finished picture in this book.

(this book was provided to me for free from the publisher Plume Books for an honest review. all opinions and colourings are mine)

I wanted to do another picture in Worlds Within Worlds and we'd been playing Astroneer on the gaming parts of the Twitch show, so I thought it tied in nicely to do the super cool spaceman. I try to diversify what we actually get done on stream so I did my best to not only base in the colours of the pyramid, but get the details in some of the sections as well. We used Tombow Dual Brush Pens and Caran d'Ache Pablos.

I decided to do the best I could with the blending of galaxies and whatnot because I do NOT like the scratchy look of pencils, especially on paint, but I found my Pablos blended really well on top of the paint and gave me a texture I liked better. I also got a sample set of Prismacolour pencils and I tried to put those to use as well, testing them out, and I did enjoy the coverage of them on this page. I had a little frustration with how I wanted the clouds to come out, but I think I like the final result that I got and since I do have two copies of this book I'm fine with doing it again.

If you'd like to watch the replay of the stream, you can see it here:

Snow Globes: Dashing Through the Snow

When I stamped out globes for the streams I stamped a ton... like, probably too many, but that means I have some to do in my own time while listening to books.

I wanted to use this fairy in some way and I thought the idea of a cute little fox trying to court her would be fun.

A semi-holdover from the winter holiday, I thought a little sheep reindeer would look good in a night time globe with a few stars.

Unfortunately I wasn't feeling well enough to stream two globes, but we did finish this cute little scene and found it a home which is always good. I love coming up with these little worlds and, hopefully, I'll get better at the northern lights effect the more I practise it.

I've been watching Shadowhunters and listening to the Mortal Instruments series on Audible so I thought it only fitting to get the colouring book. It arrived during a  stream and chat picked this picture for us to do, of Simon feeding from Jace after he'd been injured. It's a rather bloody scene, but also more than a little romantic, which is always suitable for our purposes.

While I'd heard the book before, I didn't remember the scene specifically so we made a few guesses during the stream as to what and where the scene was happening and what colours we might use. I decided to focus on the main characters for the stream, since I usually do a lot of backgrounds.

On my own, I listened to the scene on Audible. I got the colour of Simon's shirt wrong, we chose green and it's blue, and I also realised we needed to add more blood as well as injuries on Jace. It's new for me to colour in such a minimal style, for the anime type nature of the characters, but I think it worked out pretty well. I did practise ahead of time, having scanned the facial features and printed them out just in case. I didn't want to wreck my new book. I also realised they're in a very dark room, so dark that there was no way to see the chaos outside, the background had to be abstract, random, and so I decided to see it as Jace's reaction to the venom in a vampire's bite; a sort of hallucinogenic drug. So I coloured the random shapes in blues and purples and added sparkles.

If you'd like to watch the replay of the Twitch stream you can see it here:

I've been using Sunday bonus streams to make little worlds in canning jars, and now snow globes! I've had these stamped out for nearly all of December, but we have two remaining streams to go at least. It's quite fun coming up with the composure for them.

Though I had most of the design planned out, I think this one is a lot better with chat's suggestion of the tiny tree stump, raising up the snowman. The snowman is from Mama Elephant, the penguin from Hello Bluebird. The globe is from LDRS Creative.

The streams take 4+ hours, which allows me to make two projects a show. This one went just as I'd planned it with the little mouse from Lawn Fawn as well as the globe and house, and the bear from Hello Bluebird.

I coloured both of them with copics, as usual, and though there's no pencil detail I think they still came out well. 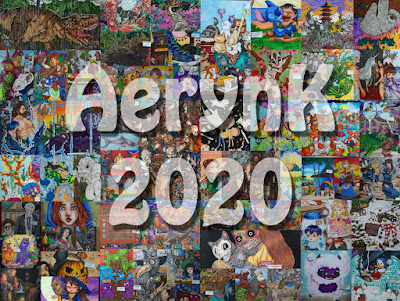 My 2020 colouring is officially finished. 68 images in total. I love these yearly wrap up pictures and the video. Something soothing about ticking all the boxes. Here's to all of us having a great 2021.

You can see them all in a detailed video here on youtube: